Car insurance hidden fees: 10 tips to avoid being caught out

A new study has found almost 1-in-5 British drivers are being hit by hidden car insurance fees - with younger motorists worst affected.

Millions of British drivers are being caught out by sneaky bills, with those hit shelling out an average of £123.40 every year. For those impacted between the ages of 18 and 24, the average figure is an eye-watering £334.40.

The study of 1,500 motorists, carried out by Perspectus Global on behalf of Cuvva this month, sheds more light on just how unfriendly and greedy the car insurance industry can be - something we want to change.

Get a quick car insurance quote 👇
Insurance for an hour to rolling monthly cover. It only takes a few minutes.

From cancellation fees to APRs

Cuvva’s study found 18% of British drivers are being hit by hidden car insurance fees. The most common are:

Cancellation fees: Almost one-third (30%) of impacted drivers said they were hit by additional fees when trying to cancel their insurance. Cuvva never charges drivers for wanting to end their policy.

Add-ons: Motorists across the country are paying extra for everything from key cover to ‘enhanced courtesy car cover’ - it all adds up, and it can be incredibly frustrating. Our study found 28% of drivers who paid hidden fees reported being hit by add-on fees.

APRs: Your APR (annual percentage rate) is essentially the interest you pay while spreading insurance bills out over a year. Some companies charge eye-watering interest. Almost one-quarter (24%) of those who said they had faced hidden fees were hit by APRs.

Monthly insurance with no hidden fees 😍
No tie-ins or surprise costs. Check it out.

Top 10 tips to avoid being hit

Our study shows, once again, how broken the car insurance industry really is. We’re determined to fix that. To help you avoid getting caught out, we’ve put together our 10 top tips. It’s time to put the customer first. 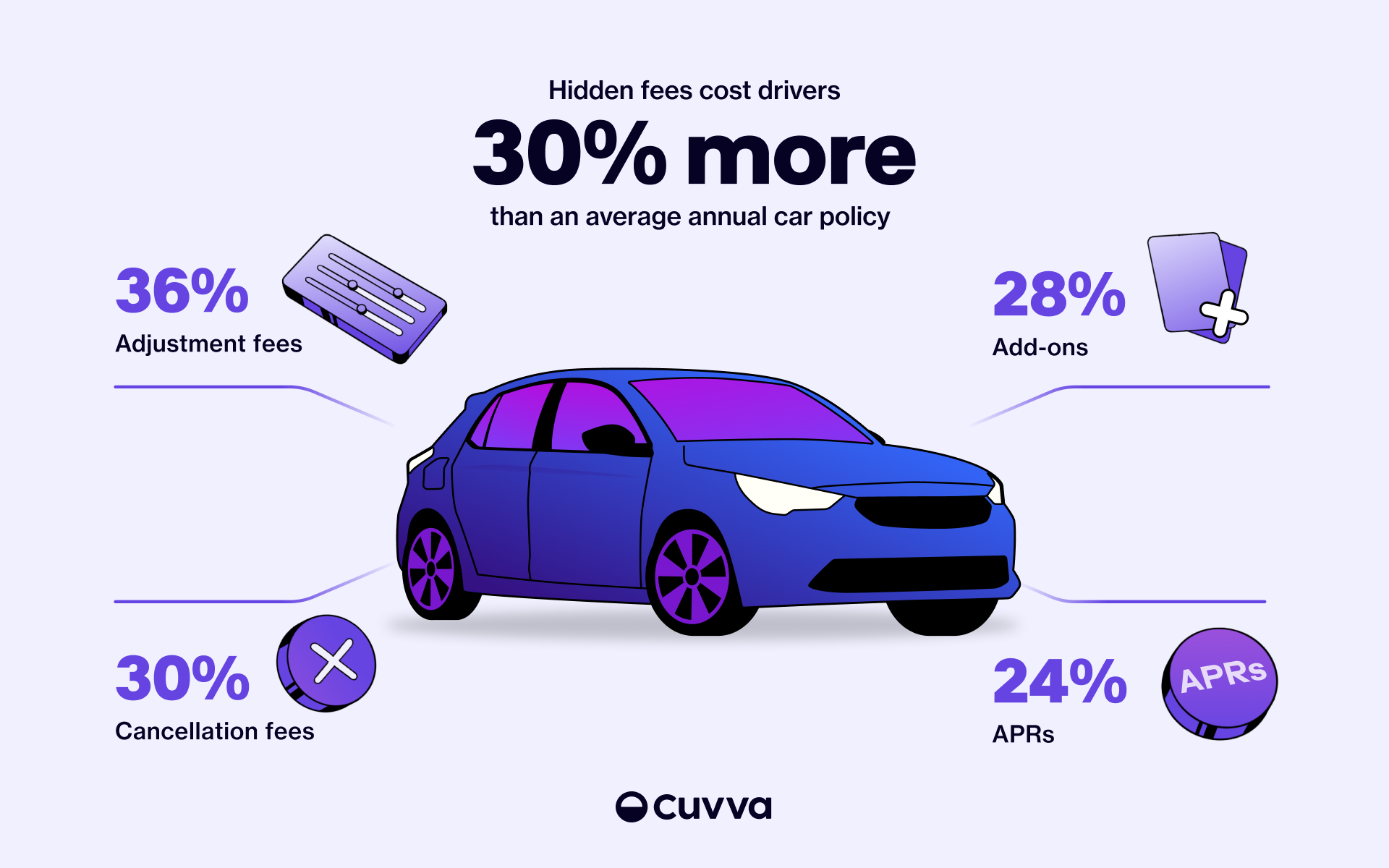 Another way is possible

Freddy Macnamara, CEO at Cuvva said: “Average car insurance policies don’t suit modern-day consumers. Drivers want the flexibility to cancel a policy or make adjustments but in most cases, flexibility comes at a cost in the form of hidden fees.

“Cuvva is on a mission to simplify car insurance to better suit consumers' actual needs. Car insurance should be there when you need it. Whether it’s just an hour or continuous cover, and it shouldn’t be layered with unfair hidden fees, penalties and interest.”

Check out a little more about our mission here.

At Cuvva we hate sneaky fees and we’ve designed a product that reflects this. Our rolling monthly contracts have no joining, cancellation fees or tie-ins. There’s no APR and you can still build up your no claims bonus (NCB).

And to help you cut your bill further, with Smart Pricing, good drivers can save up to a third on their insurance. The better you drive, the more you save.