We’ve crunched the numbers and ranked boomers, millennials, Gen Zers and Gen Xers on their driving

When it comes to driving ability, what’s more important: the experience that comes with age, or the quick reactions of youth?

In the battle of the generations, are boomers, Gen Xers, millennials or Gen Zers the best drivers?

Wonder no more! We’ve crunched our Smart Pricing data to find out which generation has the best average driving score.

We then looked at our Smart Pricing data, finding the average driving score for each generation.

Get a quote ⬇️
Insurance for as long as you need it. Get a quick quote. Learn more

Save up to ⅓ on your car insurance

With Smart Pricing, you can see your price go down the better you drive. Get your own personal driving score based on acceleration, braking, concentration, cornering and speed.

Once you’ve driven 125 miles, you get an accurate driving score, which is used to price you fairly (with some lovely discounts on offer!).

To find out which generation has the best drivers, we simply worked out the average score across each age range. Simple!

Get a quick quote 👇
Temporary car insurance for an hour, to rolling monthly cover. No deposits or hidden fees. Get a quote

After looking at how 151,415 Brits drive on the road, the average driving score out of a possible 100 points are as follows. 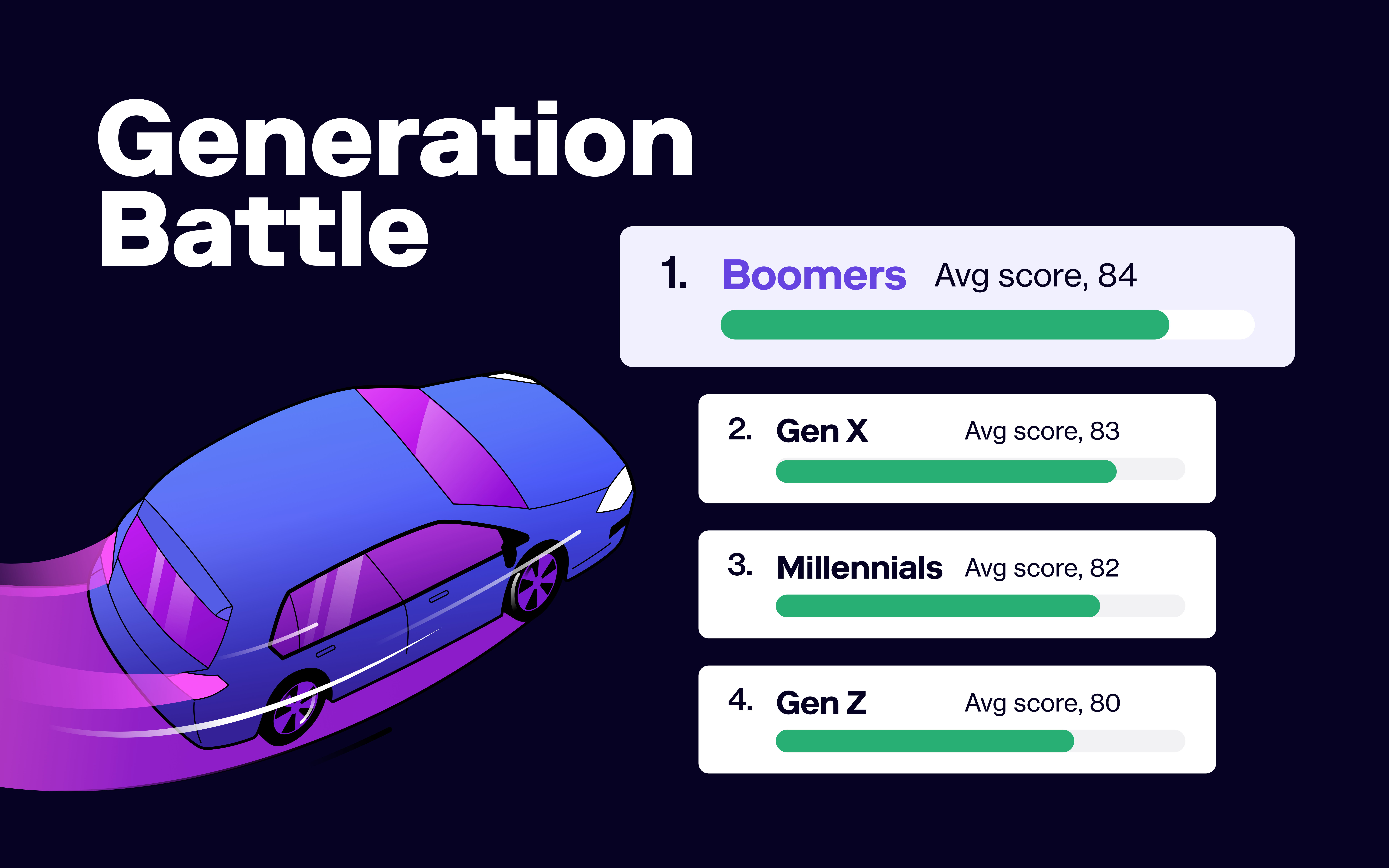 Boomers are the champions!

Let’s take a deeper look at how each generation scored based on our driving score data.

Breaking down the data

It was a close-run race, but boomers took the title by a single point, scoring highest when it came to speeding (91), braking (78), and cornering (75).

Gen X tied first place with boomers when it came to focusing on the road (96) and acceleration (76). Gen X came in second place in every other category.

Millennials came in third across categories, scoring above average when it came to focusing and cornering.

Among the core driving habits considered, Gen Zs excelled at focusing behind the wheel. Avoiding phone distractions, they scored an average of 93 out of 100.

Andy Tomlinson, COO at Cuvva, said: "Younger drivers are often unfairly slapped with the highest car insurance bills due to less experience behind the wheel. Personalised driving scores give people a chance to understand how they’re doing behind the wheel and also prove they're a good driver to lower their premiums. It’s a lot fairer to get priced according to your own driving instead of an insurance average. It gives people far greater control over their car insurance.

“With information about their driving habits at their fingertips, people are becoming more conscious on the road.”

Whatever your generation, we’ve got an insurance policy for you.

Get a quick quote here - it takes just a few minutes.

Whether you need insurance for an hour or a year (with handy rolling monthly payments and no nasty fees or tie-ins), Cuvva has you sorted.