How do you insure a car that drives itself? 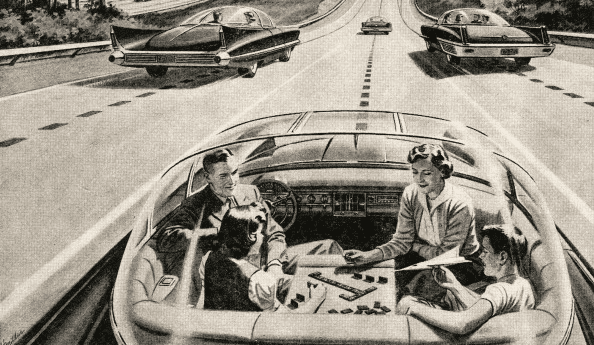 In 2015 our relationship with technology has gotten to the point where nothing is unrealistic anymore - if you were to tell me that we'll all live inside computers in 80 years' time I'd probably just shrug and say "yeah, I guess we might". A couple of decades ago this wasn't the case; the generation of our grandparents would probably have been more sceptical if you were to suggest that some crazy science fiction technology would soon become a reality. But now we seem to be open to anything, which is why when companies like Google announce they are nearly ready to release self-driving cars, we aren't all that surprised. I'm pretty sure your grandfather would think it was madness though.

Google aren't alone in the self-drive race: Tesla have recently announced plans to produce their own fully automated car, with some features of the technology even included in the latest model and recently activated by an 'over-the-air' update. Other participants of the robot-car race include Uber and a company called Nvidia, who are working closely with Tesla, Rolls Royce and Aston Martin to make self-driving cars a reality.

It all sounds like a great plan for an automotive utopia, but actually putting the technology in place for everyday use is likely to be problematic. For us there was one big question: how would the insurance work for cars without drivers?

This is a problem that insurers are already thinking about, so much so that they're beginning to note it as an upcoming threat in their annual reports. After all, 9 out of 10 road incidents happen because of human error. Although most analysts suggest that self-driving cars won't be fully in use until around the 2050s, it's still something insurers are beginning to prepare for.

One big concern for insurers is to do with who can be said to be liable in a crash when no one is driving the car. Perhaps they will follow the chain all the way back to the manufacturer and hold them liable, seeing as the person in the car can't be blamed. However, the person that programmed the system isn't always the same person that built the car - do you blame the designer of the technology or the person that physically built it into the vehicle? If you really wanted to be pedantic you could extend the argument to include automated factories: who is liable when the self-driving car was built by a self-operating car plant? If you've seen the film I, Robot then you'll know what I mean.

The answer is of course that the owner of the vehicle will take out a specialist policy that has been approved with certain platforms (Tesla, Google, Apple) which will cover the car and it'll probably look somewhat familiar to what we see today. What has not been widely considered is that these policies be wildly profitable! This is because your insurers actually make money when you are the non-fault party in a claim, via a variety of channels. As a result having a book of vehicles on the road that are self-driving, and therefore very rarely at fault, the insurer stands to make a bomb by just waiting for manual drivers to crash into them. This is why we think that insurance will actually be the reason you will be forced to switch to using a self driving car. The cost of insuring and therefore the premiums on the remaining manual vehicles on the road will be forced up by this effect. If you take this to the extreme you will see that it will quickly begin to cost thousands of pounds to insure even low insurance group manual vehicles.

The upshot of this will be that insurers themselves will have to radically rethink their approach - the £11bn UK car insurance industry will likely shrink to 10% of this over the next 25 years in a positive feedback loop of: higher premiums for manual cars -> fewer manual cars -> Higher premiums for manual cars. This effect can be seen already, automatic braking, for example, has already resulted in fewer claims being made by people on the receiving end of fender-benders, meaning lower insurance costs for more automated cars.

Whether robot-cars are just around the corner or on the horizon is still up for debate, but that won't stop insurance companies from making plans to prepare for the eventuality - they're going to have to, seeing as it's no longer a question of "if" but "when".